You are here: Home / Parenting / Definite DONT’s for Child Sleepwalkers

If you want to know the Definite DONT’S for Child Sleepwalkers, I’ve compiled the info you need!

Child Sleepwalkers are much more common than most people think, as we talked about in my previous post: Sleepwalking Children: Common or Worrisome. It can still be scary, to be the parent of a sleepwalker, and can be tough to know what’s safe to do, and what’s not safe to do. There are a lot of things you shouldn’t do if your child sleepwalks, and we will cover those here. 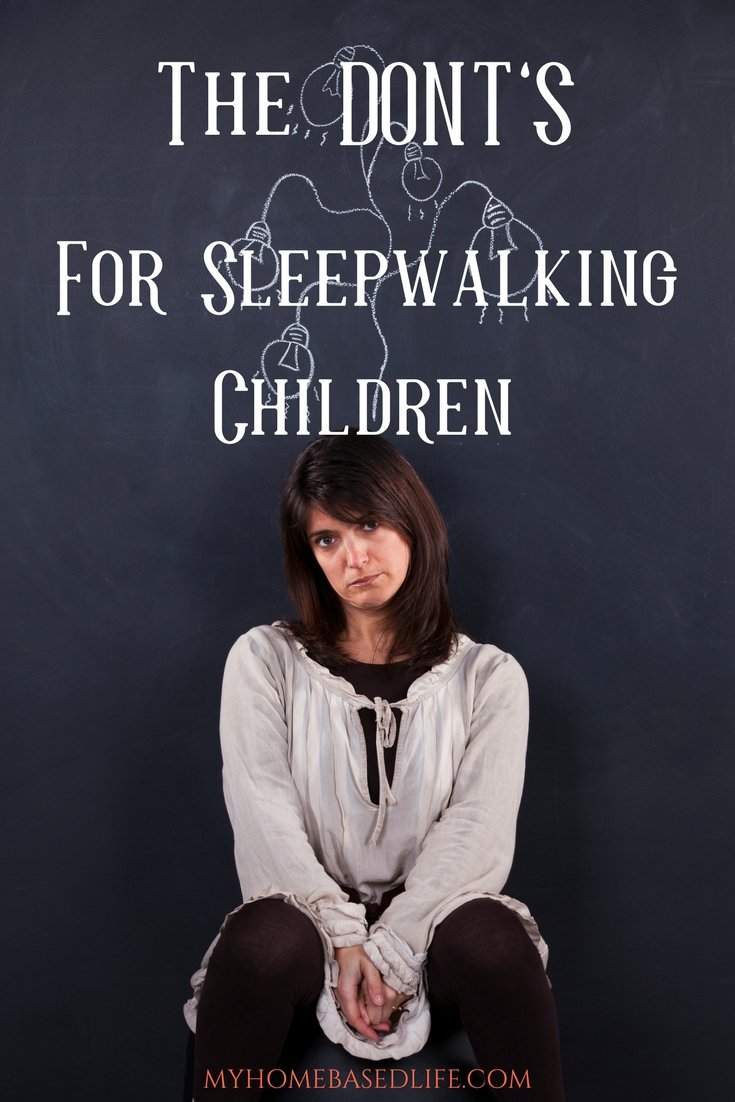 One of the scariest things about Child Sleepwalkers is that they can potentially leave the house, depending on the severity of their sleepwalking. Children have left through unlocked doors, gates, and even windows before, putting themselves in great danger. Since children aren’t awake while they’re walking, they can wake up and realize they’ve traveled far from home and have no idea how they got there. Children can also unknowingly expose themselves to the weather’s elements leaving them susceptible to the temperatures outside dressed in only what they sleep in. In addition, they can also wander into streets where they can be hit by a car, or even can fall prey to drowning if near a body of water or a pool. If you have a child sleepwalker, do not leave the doors to your home, gates to your yard, or windows unlocked.

While sleepwalking can come from nothing at all, and can just be a quirk someone has, it shouldn’t be ignored. Many times Child Sleepwalkers have an underlying cause for why they sleepwalk. As we discussed in our previous article about Sleepwalking Children, Child Sleepwalkers can have many complications that can cause their sleepwalking. Anxiety, stress, and even medical problems like Sleep Apnea can result in sleepwalking and as a result, sleepwalking should never be ignored. Follow-up with your pediatrician to make sure your child’s doctor knows they sleepwalk to see if they think there may be an underlying cause.

I’ve heard of and read many stories about parents who, at their wit’s end, would lock their children in their rooms, or try to barricade their doors to ensure they didn’t escape while sleepwalking. While these parents have their children’s best interest at heart, they’re really making a very dangerous decision. If ever there were a weather emergency or a fire in the home, that child would have no way of escaping unless someone let them out, which may not be a possibility. It’s always important to make sure you keep your Child Sleepwalkers safe, but it’s also important to think about every possibility and plan for that too. Don’t lock or block them in their rooms.

Sometimes when children sleepwalk, they can do or say things that may be offensive. Children can sometimes be violent when they sleepwalk because in their dreams they’re fighting off an attacker or some dangerous situation. They don’t mean to hurt you if they do, so don’t take their acts of violence personally against you. Sometimes their words could also be offensive. Remember that they are asleep and most likely won’t remember anything they said or did while sleepwalking. Don’t assume they meant anything they did or said while sleepwalking, and most importantly don’t take their actions or words personally.

Punish Them For Their Actions While Sleepwalking

Just like you shouldn’t take a sleepwalker’s actions personally, you also shouldn’t punish a child for what they say or do while sleepwalking. If you have a child who sleepwalks, punishing them for leaving the house in the middle of the night, or for punching a lamp and breaking it while sleepwalking, or for peeing in the laundry hamper while asleep is absurd and unfair. You can’t punish someone for something they aren’t even aware they’re doing, and can’t help. Don’t punish your child for what they do when they sleepwalk or threaten to punish them if they don’t stop sleepwalking.

Child Sleepwalkers are more common than you think and can be tough to parent. It’s a learning process, but once you learn the Do’s and Dont’s, it can be easier to cope. Do you have a Child Sleepwalker? What are some of your tips? Share them in the comments!