The Easter story is from the Bible and tells of the death, burial, and resurrection of Jesus Christ, the Son of God. This is the story of God’s powerful love for each of us and the sacrifice He gave. We celebrate Jesus’ resurrection on Easter Sunday, but there would be no resurrection without His suffering on a cross and buried in a borrowed tomb. 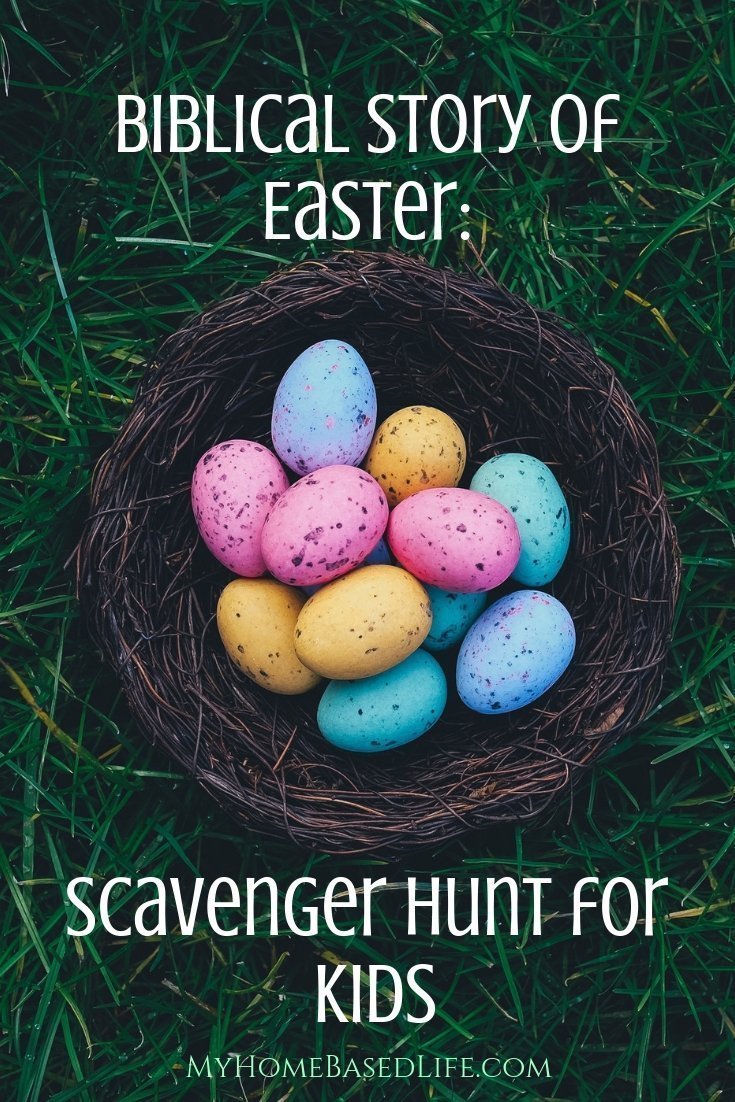 It is important for our children to understand that Easter isn’t just about the Easter bunny, egg hunts, and candy. There is an amazing story of love and sacrifice that they need to hear so why not make it an interactive story? A story they can listen to and learn about the events in a way that makes it fun.

I found that the best way to share the Easter Story with children is through using an interactive Easter scavenger hunt! Download the printable check off sheet ( at the bottom of the post) or the picture book and bring the Easter story to life in a whole new way as you share the accounts from the story of Easter highlighted below.

Each of the highlighted accounts below come from the book of Matthew NIV version. It is important to share the scripture as you join your children The Story Of Easter Scavenger Hunt.

Jesus Enter Jerusalem As King– As Jesus entered into Jerusalem on a borrowed donkey large crowds gathered in the streets spread their cloaks and cut branches from the trees and spread them on the road. The crowds that followed him they shouted these words of worship and praise. (Matthew 21:1-11)
“Hosanna”
“Blessed is he who comes in the name of the Lord!”
“Hosanna”

Jesus And The Last Supper -Before the Passover celebration, Jesus knew that His hour had come to leave this world and return to his Father as predicted. It was time for supper, and the Devil had already enticed Judas, to carry out his plan to betray Jesus. Jesus knew that the Father had given him authority over everything and that he had come from God and would return to God. While they were celebrating the Passover meal, Jesus took bread off the table he broke it and gave it to his disciples, while saying, “Take and eat; this is my body.” Then he picked up a cup, he gave it to his disciples, saying, “Drink from it, this is my blood which is poured out for the forgiveness of sins. (Matthew 26:17-30)

Jesus’ Arrest in the Garden of Gethsemane – After saying these things, Jesus crossed the Kidron Valley with his disciples and entered a grove of olive trees. Judas, the betrayer, knew this place because Jesus had gone there many times with his disciples. The leading priests and Pharisees had given Judas a battalion of Roman soldiers and Temple guards to accompany him. Now with blazing torches, lanterns, and weapons, they arrived at the olive grove. Jesus fully realized all that was going to happen to him. Stepping forward to meet them, he asked, “Whom are you looking for?” “Jesus of Nazareth,” they replied. “I am he,” Jesus said. Judas was standing there with them when Jesus identified himself. And as he said, “I am he,” they all fell back to the ground! Once more he asked them, “Whom are you searching for?” And again they replied, “Jesus of Nazareth.” “I told you that I am he,” Jesus said. “And since I am the one you want, let these others go.” (Matthew 26:36-45)

Jesus Is Tried And Beaten – Pilate places Jesus on trial where he was found guilty and then handed over to the guards who beat him with a whip. The soldiers made a crown of long, sharp thorns and put it on his head, and they put a royal purple robe on him. “Hail! King of the Jews!” they mocked, and they hit him with their fists. Pilate went outside again and said to the people, “I am going to bring him out to you now, but understand clearly that I find him not guilty.” Then Jesus came out wearing the crown of thorns and the purple robe. And Pilate said, “Here is the man!” When they saw him, the leading priests and Temple guards began shouting, “Crucify! Crucify!” (Matthew 27:27-31)

The Crucifixion Of Jesus – Carrying the cross by himself, Jesus went to the place called Skull Hill which is the place they crucified him. There were two others crucified with Jesus. Pilate posted a sign over Jesus that read, “Jesus of Nazareth, the King of the Jews.” The place where Jesus was crucified was near the city; and the sign was written in Hebrew, Latin, and Greek so that many people could read it. Then the leading priests said to Pilate, “Change it from ‘The King of the Jews’ to ‘He said, I am King of the Jews.'” Pilate replied, “What I have written, I have written. It stays exactly as it is.” When the soldiers had crucified Jesus, they divided his clothes among the four of them. They also took his robe, but it was seamless, woven in one piece from the top. So they said, “Let’s not tear it but throw dice to see who gets it.” This fulfilled the Scripture that says, “They divided my clothes among themselves and threw dice for my robe.” So that is what they did. (Matthew 27:32-44)

The Death Of Jesus – Jesus knew that everything was now finished, and to fulfill the Scriptures he said, “I am thirsty.” A jar of sour wine was sitting there, so they soaked a sponge in it, put it on a hyssop branch, and held it up to his lips. When Jesus had tasted it, he said, “It is finished!” Then he bowed his head and gave up his spirit. (Matthew 27:45-56)

The Burial Of Jesus Body – Joseph a disciple of Jesus, asked Pilate for permission to take Jesus’ body down. When Pilate gave him permission, he came and took the body away. Nicodemus, the man who had come to Jesus at night, also came, bringing about seventy-five pounds of embalming ointment made from myrrh and aloes. Together they wrapped Jesus’ body in a long linen cloth with the spices, as is the Jewish custom of burial. The place of crucifixion was near a garden, where there was a new tomb, never used before. And so, because it was the day of preparation before the Passover and since the tomb was close at hand, they laid Jesus there. (Matthew 27: 57-61)

The Guards At The Tomb Of Jesus – The next day, the chief priests went to Pilate requesting an order for the tomb to be made secure until the third day. They feared Jesus disciples may come and steal His body and tell the people that he has been raised from the dead. Pilate gave an order to make the tomb secure by putting a huge stone at the entrance and posting a guard to keep watch over it. (Matthew 27:62-66)

The Resurrection of Jesus Christ – Early Sunday morning, while it was still dark, Mary Magdalene came to the tomb and found that the stone had been rolled away from the entrance. She ran and found Simon Peter and the other disciple, the one whom Jesus loved. She said, “They have taken the Lord’s body out of the tomb, and I don’t know where they have put him!” Peter and the other disciple ran to the tomb to see. The other disciple outran Peter and got there first. He stooped and looked in and saw the linen cloth lying there, but he didn’t go in. Then Simon Peter arrived and went inside. He also noticed the linen wrappings lying there, while the cloth that had covered Jesus’ head was folded up and lying to the side. Then the other disciple also went in, and he saw and believed — (Matthew 28:1-10) 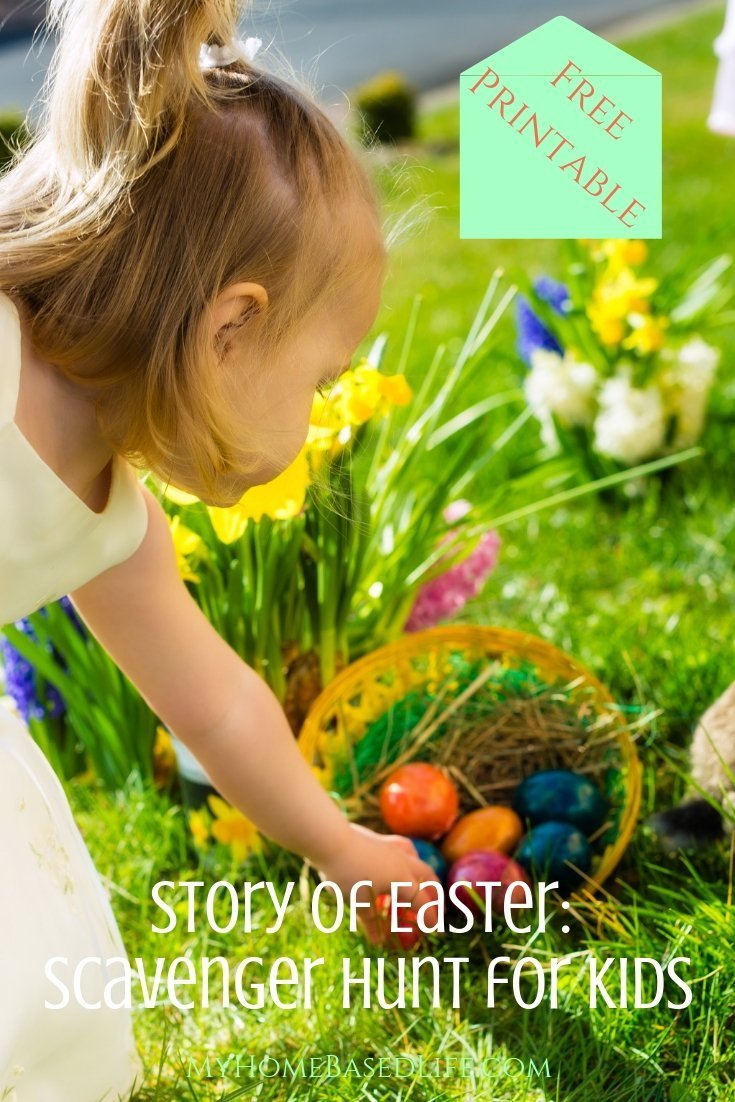 Don’t forget to download the printable Easter Scavenger Hunt check off sheet or the picture book and bring the Easter story to life in a whole new way. What are some ways you help your children understand the biblical story of Easter?